It’s tough to put together a “Best Golf Courses” list that stands out against the competition from Golf Digest or Golf Monthly. So I decided to take a different approach with this list, going beyond slope ratings, difficulty, and reputation, to look for courses with something truly spectacular that sets them apart from all the other awesome courses around the world.

Our list isn’t based on science—it’s based on our own experiences and those of our guests. This list is for the golfer looking to play a memorable course, one that satisfies all your primal golf desires.

These courses are highly rated, of course, and well known among the world’s elite golfers, but they also have stunning, unexpected views and unique, unforgettable features. Check it out and let me know what you think.

1. Golf Pete Dye’s Teeth of the Dog—its bite is worse than its bark.

If golfing the Caribbean is on your bucket list, don’t miss Teeth of the Dog. Currently ranked #1 in the Caribbean and 39th in the world, this Dominican Republic course has seven breathtaking holes carved into the rocky Caribbean coast. It’s home to the Latin American Pro-Am tournament this August.

Casa de Campo Resort has three Pete Dye courses, so when you’ve recovered from your dog bite, enjoy a round at Dye Fore and The Links.

2. Gary Player calls The Links at Fancourt his greatest accomplishment as a course designer. 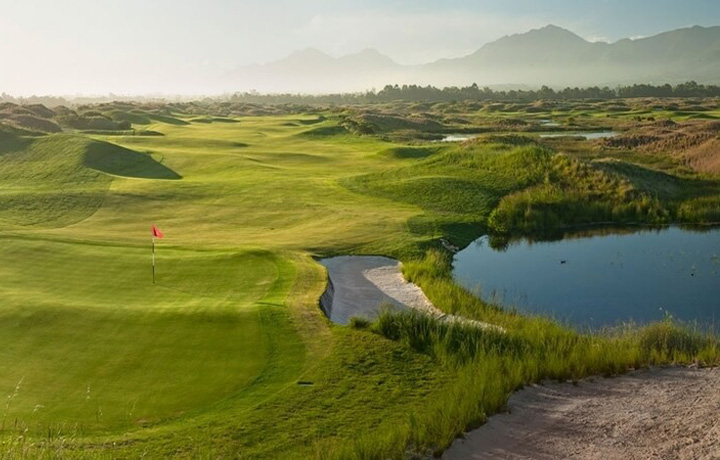 Want a challenge? Try the signature hole, “Roon the Bend,” the par-4 15th. It’s a right to left dogleg with wetlands on the left side from tee to green. Of course, the 175 meter, par-3 17th is another stunner. Known as “Prayer,” this hole features an L-shaped green 40 meters deep and an intimidating tee shot.

3. Looks can be deceiving on the Old Course at Royal Troon.

Royal Troon’s motto is Tam arte quam marte, or “as much by skill as by strength.” It’s an apt word for this classic “out and back” Scottish links. The first six holes are played by the sea—and then it’s into the wind for the final eight.

The signature hole is number 8, a short par-3 called the Postage Stamp. At 126 yards, it should be the easiest hole on the course—but Tiger Woods took a six here at the British Open.

If you’re not up for something quite so challenging, take a turn on the Portland, a meandering links through the gorse and broom.

With 300 days of sunshine a year, Spain is becoming a top golf destination—and Valderrama is one of its most spectacular courses. Winding through ancient Cork Oak trees (some of which were there during the time of Christopher Columbus), Valderrama is a Robert Trent Jones-designed course nicknamed the “Augusta of Europe.”

The signature hole is the par-5 4th, named “La Cascada.” It’s said to be the most expensive hole of Trent-Jones’ career, an elevated green with a lovely rocky waterfall cascading over the side.

About an hour east of the infamous Teeth of the Dog, Punta Espada jolts you out of your Caribbean torpor with a 611-yard second hole. Much of the course runs along the water with stiff ocean breezes and the occasional ocean spray.

It’s a hilly course with gorgeous views and plenty of gusting wind reminiscent of Scotland. The signature hole is #13, a 250-yard par 3 that tees off over a strip of ocean to a green surrounded by surf. It’s one of the most photographed holes in the world.

6. Safari at Kruger after a round at the “Augusta of Africa,” Leopard Creek.

The Crocodile River is all that stands between Leopard Creek and the world-renowned Kruger National Park in South Africa. Imagine golfing alongside antelope, buffalo, hippos, and perhaps even an elephant or two if you’re lucky.

Designed by Gary Player and Johann Rupert, Leopard Creek’s signature hole is the par-5 13th; the green hovers some 30 meters over Crocodile River, offering a mind-blowing panoramic view of the Kruger. 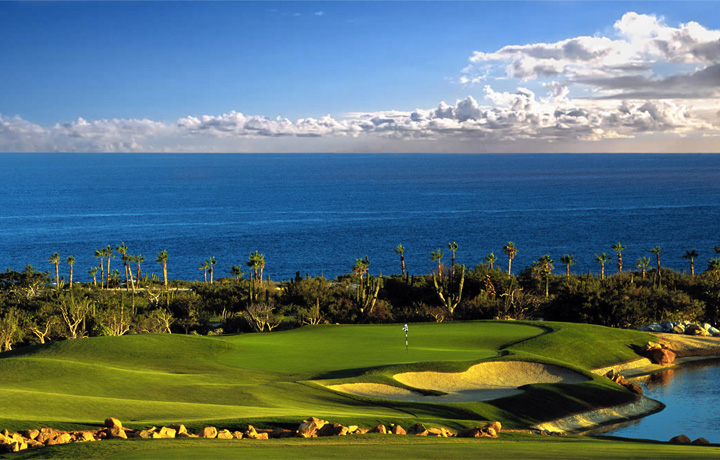 If you don’t think golf when you think Mexico, you haven’t been to Cabo, one of the best golf destinations in North America. The Ocean Course at Cabo del Sol is a Jack Nicklaus signature course with seven incredible oceanfront holes—an entire mile of oceanside golf.

An army of giant cardon cacti stand sentinel over the emerald greens against the sapphire backdrop of the Sea of Cortez. The 17th hole is the signature hole, where you’ll tee off from a cliff over a cove; the green is surrounded by dramatic rock formations jutting up from the sea.

Quivira is another Nicklaus designed course in Los Cabos. It’s been compared to Pebble Beach for its stunning cliff views. This is not a walk-friendly course—the climb from the 4th to the 5th hole is a mile-long ascent to a cliff overlooking the Pacific. In fact, the 5th and 6th sit some 275 feet above the ocean; you get birds-eye views of the resort down below and humpback whales breaching in the surf.

There are three comfort stations along the course with adult beverages, burritos, and spectacular views. In fact, this is such an unusually strenuous and scenic course, the pace of play is set at five hours.

9. Golf the “Golden Mile” at Durban in South Africa.

Durban Country Club is sandwiched between the Golden Mile of Indian Ocean beach and the Moses Mabhida Soccer Stadium with the downtown Durban skyline towering behind the opening tees. But don’t let all the urban modernity fool you—Durban is right in the heart of the Zulu Kingdom in the seaside province of KwaZulu Natal.

The course was built on sand dunes and the holes undulate through the tropical vegetation. From your golf cart, the rolls and ripples of the 17th fairway feel a bit like a rollercoaster ride. The signature hole is the par-5 3rd, a world-class hole set in a lush valley.

Pat Ruddy designed the European Club 30 years ago, continually recalibrating it with design improvements in a manner reminiscent of Donald Ross at Pinehurst. It’s a continual evolution that means the course never grows old, but continues to challenge year after year.

The European Club is a links course just outside Dublin distinguished by sweeping views of the sea. Tiger Woods holds the links record here, shooting a 67 on his first visit in 2002. The European Club also holds the record for the longest green in the world, measuring 127 yards from front to back, on hole 12. That’s the length of a football field and then some.

11. El Cardonal at Diamante is the first course ever designed by Tiger Woods.

We keep coming back to Mexico, but the opportunity to play the first course designed by Tiger Woods is reason enough to hit El Cardonal. The Dunes, a true links experience in Mexico, is the first track at Diamante, and Tiger’s course compliments it perfectly. Based on the traditional California courses Tiger grew up on, El Cardonal is a monster 7,363 yard, par 72 course.

The terrain is rugged and exacting—and the carts are souped up to handle it. Don’t expect the usual E-Z-GO golf carts; the ones at El Cardonal have wide tires and resemble ATVs more than traditional carts.

Ready to try something new?

Where are your golf plans taking you this year? If you’re ready for an out-of-the-box experience, why not try one of these spectacular courses?

We’re here to help you plan a golf adventure that ticks all your particular travel boxes. Get in touch today and let’s put some plans in motion. Not ready to chat? Sign up for our free email course to learn more about planning custom golf vacations in the UK and Ireland.