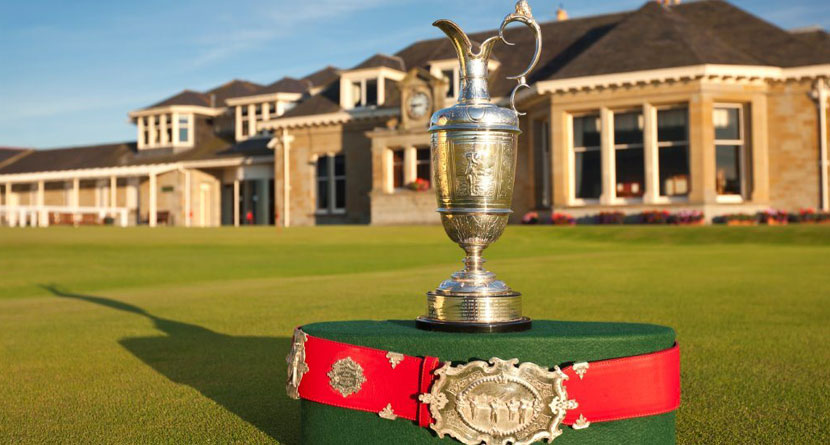 The Open Championship began when the first ball was struck at Prestwick Golf Club in 1860 as eight golfers competed for what was known as the “Challenge Belt” made from red leather and a silver buckle worth 25 GBP.

Willie Park Sr. bested Old Tom Morris by two shots, and since then, the Open Championship has grown into one of the most prestigious golf tournaments in the world with a purse of 10.5 million GBP.

Our team here at Fairways to Heaven Golf has developed a unique experience that gives the traveling golfer the chance to play six rounds of championship golf — one round where it all started, followed by five rounds across current Open venues, delivering an experience that won’t soon be forgotten.

Here is how the trip unfolds.

Golfers touch down into Glasgow Airport in the west of Scotland, a bit blurry-eyed and groggy from the overnight flight from the States, but there is a building sense of excitement as you step out of the terminal onto your coach and begin the short drive south.

You’re greeted as you come off the coach by a representative of Prestwick Golf Club where you are then given a first-hand account of the club’s history with the Open Championship. The clubhouse is a virtual museum and the members are clearly proud of their history, as well they should be.

After washing up in the locker room, a coffee, and a quick bite, the pegs go in the ground and the first tee shots of the tour are struck at Prestwick — a classic links that won’t overpower you with distance but will challenge you with small greens and undulating fairways.

Due to the limited overall area of the course, it eventually was not able to handle the crowds of the Open Championship and was pulled from the rotation. However, this was not before hosting the championship an incredible 24 times!

With the first round under your belt, you check into the many hotels in the Troon area convenient to the many links in this area.

After a much-needed night’s sleep, golfers grab their clubs and make their short walk to Royal Troon Golf Club, where names like Watson and Palmer were etched on the Claret Jug. Most recently, Troon was is the site of an unforgettable final round finish between Phil Mickelson and Henrik Stenson where Stenson set the scoring record of 20-under par.

The clubhouse at Royal Troon is a must to share a pint or dram of whiskey after golf, and soak in the history of this incredible club. Take a short walk to town and visit one of the many great restaurants in Troon as well as the classic Scottish pubs, many of which have their own unique history related to the golfing culture in the area.

As you now have your bearings, you are headed south to a course that recently underwent an extensive renovation and brought what was already an incredible track to another level altogether.

The Ailsa Course at Turnberry is a four-time host of the Open Championship, and it now ranks in the top-5 courses in the world outside the USA. With that pedigree, the course does not disappoint. It provides as complete a links golf experience as you will find anywhere in the world with one of the most iconic shots at the par-3 9th hole as you carry your tee shot over the water to a green backed up by the trademark lighthouse, which now serves as the halfway house and even has a two-bedroom suite for guests.

You know are on a roll and there is no slowing down now. Guests make their way to the Glasgow train station where you catch the train down the west coast of Scotland, crossing the border into England and arriving into an area referred to as England’s Golf Coast.

Home to more than 15 championship courses, the area is headlined by three current Open venues, one of which is next on your list: Royal Lytham & St Anne’s.

Jones, Ballesteros and Player have put their names on the Claret Jug here and Ernie Els is the most recent to hoist the trophy. Not overly long, Lytham challenges the golfer with demanding accuracy with close to 170 bunkers on the course, which is actually significantly less than in previous years.

&NBSP;
Guests can take advantage of the Dormy House at Lytham, which provides completely newly renovated rooms, a view over the putting green and first tee, as we as exclusive access to the clubhouse.

For those looking for a bit more of an urban feel, Liverpool could be the place with a stay at the Hard Day’s Night Hotel in the city center providing limitless off the course options right on your doorstep.

Just a short drive through the tunnel, you come off the bus at Royal Liverpool or Hoylake, as the locals like to call it. This 12-time host of the Open Championship has had recent winners the likes of McIlroy and Woods that provided some of the most memorable moments of any championships.

The course is one that to the eye may seem tame, but as you get into this classic links, you know you’ve found yourself somewhere very special. If in Liverpool after golf, head over to the Alchemist Pub, which offers one of the most unique and comprehensive cocktail lists in all of England, but careful how many you have as your final round is tomorrow!

How do you put a bow on an experience like this? A round at iconic Royal Birkdale. Ten times the host to Open Championship, most golf fans will remember the epic battle between Jordan Spieth and Matt Kuchar on Sunday just two years ago.

The links at Birkdale are challenging but fair, and there is no better way to finish than here. You find yourself with your golfing brethren having a pint overlooking the 18th green looking back on what the last six days have brought you — a lifetime of memories on some of golf’s greatest stages.

Your tour has come to an end, but you have walked in the footsteps of so many champions and have made your own mark, which you will not soon forget.

Now is the time to get your Open Championship experience on the calendar for 2020….give the team at Fairways to Heaven golf a shout at

and our experts will build your Open Championship experience today!